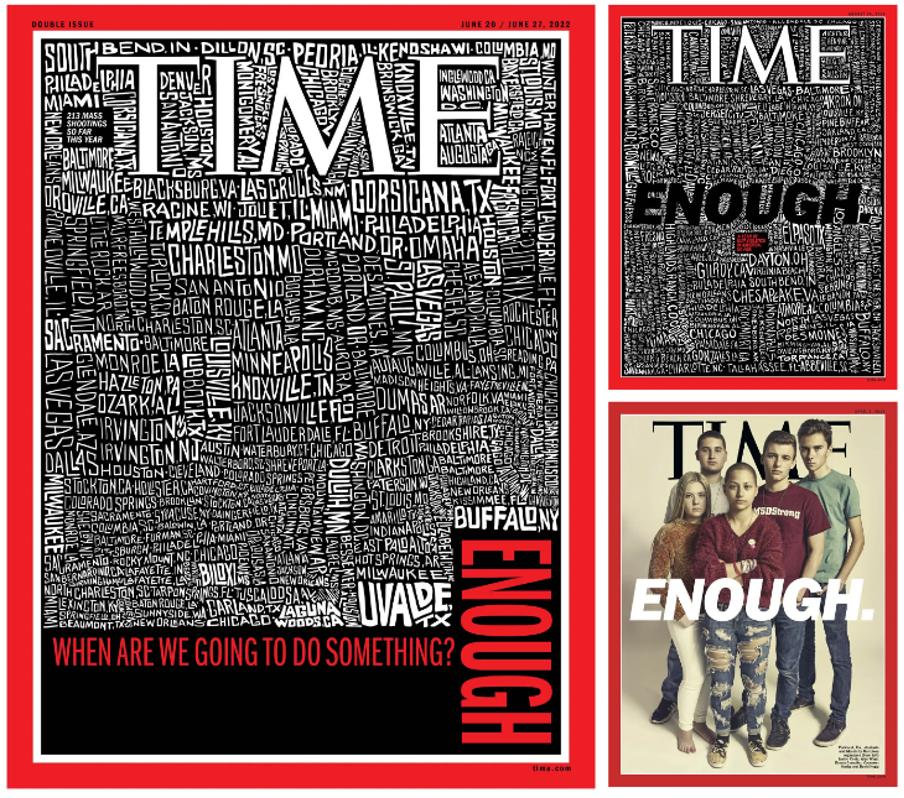 “At TIME, we’ve been in the business of words for nearly a century. But it is hard to think of a task more challenging for my colleagues and me than finding the words to convey the horror, despair, and senselessness of America’s epidemic of gun violence. This year alone, there have already been 213 mass shootings in the U.S.—and 27 shootings at schools” writes Edward Felsenthal (Editor-in-Chief and CEO of Time) in an article about the cover of the next magazine.

He speaks about how he and his colleagues, during these years, tried to let the magazine speak itself, creating covers which were able to create emotions, getting straight to the heart of the people.

Now they propose again the word ‘Enough’, from the interview of the American professional basketball coach, Steve Kerr to reiterate how important it is to do something about it.

In the past, they have already used this word for covers but now there are other different characteristics: The white writings at the top of the cover are the names of all the cities in which there have been shooting this year. The red sentence and the word ‘enough’ below, formed a gavell, that means the need to act sooner as possible.

It summarises all the tragic events related to the possession of unlicensed weapons.

The last dramatic massacre was on tuesday May 24th, in Uvalde,Texas, where an eighteen-years-old boy opened fire in the grammar school of the city.

It was nearly midday when Salvador Ramos, a high school student from the same city, irrupted armed in the Robb Elementary School and went into several classes, opened fire. At the end, he barricaded himself into a class with all the 8-9 years old kids and their teacher and killed them.

There were many wounded but the death toll was: 21 people killed, 19 students and two teachers.

“Too much violence, too much fear, too much grief” said the US President Joe Biden during the Graduation Speech at the University of Delaware, referring to the other shooting on 14th May in a supermarket in Buffalo, New York.

“As I speak, those parents are literally preparing to bury their children. In the United States of America”.

Even the vice president Kamala Harris has spoken out firmly against the possession of unlicensed weapons and proposing an assault weapons ban.

“The bigger question of course—far more important than what words we use—is what we as a society do” continued Felsenthal, “As many have noted this week, surely an 18-year-old, who is too young to drink or rent a car, should not be able to purchase with ease two AR-style rifles and 375 rounds of ammunition over the course of three days”.

The situation seems to be getting worse year after year. Will the Government be ready for a change of course to a safer society, not waiting for more blood to be shed?