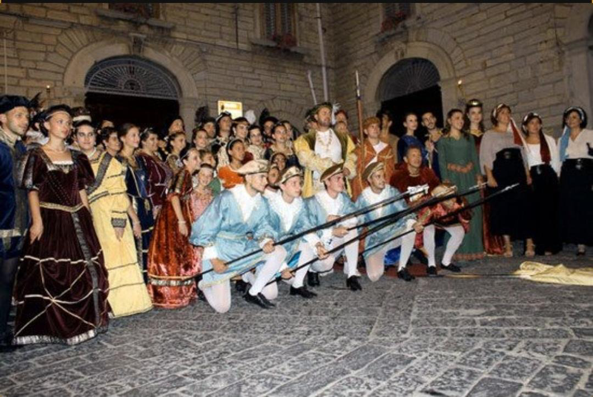 Nicosia is a small town in the province of Enna in Sicily, which was under the Spanish domination, like the rest of Italy, in the 16th century.

After 1530, the year of the coronation of Charles V as king of Sardinia, Naples and Sicily, and after the battle of Tunis against the Ottoman Turks, he came to Sicily, precisely in 1535. Charles V came to Nicosia, staying about two days, probably in the Palace of the La Via family, which were among the 24 local barons.

Nicosia, indeed being a state town, that is a rich small town with fiefdoms and with a great artistic and architectural heritage, was nominated “’the city of the 24 barons”.

The barons were nobles who received this title and a fiefdom from the king because they were faithful to him. Charles V is remembered because he increased the number of barons as well.

On the occasion of his visit to the city, the Nicosians were loyal and devoted. The artisans made a small throne for him with a coat of arms of his face and a coat of arms of the Habsburg family with golden details. The throne is still kept in the Basilica of Santa Maria Maggiore, which he went to see during his stay in Nicosia.

Today his visit is still remembered with a real Historical Parade, that last year was celebrated as the oldest in Sicily for its XXVII edition. Every year the Historical Parade involves a lot of people and different groups from Sicily that parade and show off period costumes.

The Parade starts with a literary memory of his visit, then in Piazza Garibaldi, flag wavers and musicians perform and entertain the spectators. After that, there is a scene that represents the moment when the Emperor delivered the keys and gifts to the city.

There are some performances of musicians, archers, jugglers, falconers, flag wavers and dance groups. There are also painting exhibitions, miniature sculptures and handworks.

The event ends with offering thanks and with the Emperor’s curiosity, for example, his love for food.

I A Liceo Classico