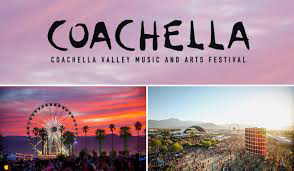 In every magazine or newspaper these days, you’ve probably been bombarded with Coachella news.  A name that you have never heard, or that perhaps reminds you of something.  Coachella is a (now) very famous music festival held every year in April, taking place over two weekends.  The location is the spectacular desert in the Indio area (California), just a two-hour drive from Los Angeles.

Coachella (Spanish pronunciation) takes its name from the symbolic snake of Mexico City.

At its inception (in 1999), the Coachella Festival was born as a “showcase” for the most alternative and lesser-known singers or musical groups, almost always belonging to the grunge and indie genres.  But over time, Coachella has turned into a real international event, thanks in particular to the influx of celebrities and the rapid spread due of social media. Since 2002, the Festival has started to occupy two full days instead of one.  Later, precisely from 2007, it found a fixed position in April and extended its duration for three consecutive days, spread over two weekends.

The event allows you to listen to big names, but also to meet emerging musical artists.  It is one of the largest, most famous, and most profitable festivals in the world.  Calculate that the 2017 edition sold 250,000 tickets, earning 114.6 million dollars.

The event is famous for hosting many performances by Mexican alternative rock and electronic artists, as well as sculptural installations.

It is held on two-week weekends around April and is expected by millions of people every year.  Thanks also to the spread of the media, especially social networks, Coachella has made itself known and is considered a dream for those who love music, art, and fun.

Influencers from all over the world prepare for the event for months and months and when it comes to life they delight us with millions of shots.

And if you are a camping lover, the Coachella Festival is the one for you.  Since 2003, the organization has set up a camping facility with tents and caravan stations.  If you can’t find a place in Indio, you can also stay overnight in nearby Lake Eldorado (with huts inspired by Indian tents) or at Safari Tents.  There is no shortage of hotels and resorts in the surrounding area.  Here you will find a wide choice, but some are very special, such as The Chateau at Lake and Embassy Suites in La Quinta.

and if you wonder where you could eat there are hundreds of food trucks with typical cuisine from every corner of the world that are definitely a feature of the festival, while gourmet lovers can eat in one of the pop-up restaurants, real starred restaurants away from home.  The festival area consists of six music areas.  The Coachella Stage is the main stage where the best-known artists perform, the Outdoor Stage has a more intimate atmosphere, then there are three large tents with the name of three deserts (Gobi, Mojave, and Sahara) and a sixth zone, the Yuma Yent, dedicated to the Native Americans of the place.  Any names he played at Coachella?  There is an embarrassment of choice because practically all the most important artists in the world have performed there.  Arcade Fire, Gun and Roses, Beck, Daft Punk, Oasis, Iggy Pop, Sigur Ros, The Cure, Radiohead, Bjork, Red Hot Chili Peppers, Beastie Boys, Depeche Mode, Madonna, Coldplay, Prince and we could go on and on until the Beyoncè’s spectacular performance, last year followed by over 400,000 people on YouTube at the same time.

So what are you waiting for if you too are a music lover and want to have an unforgettable experience, book your ticket for the next edition!