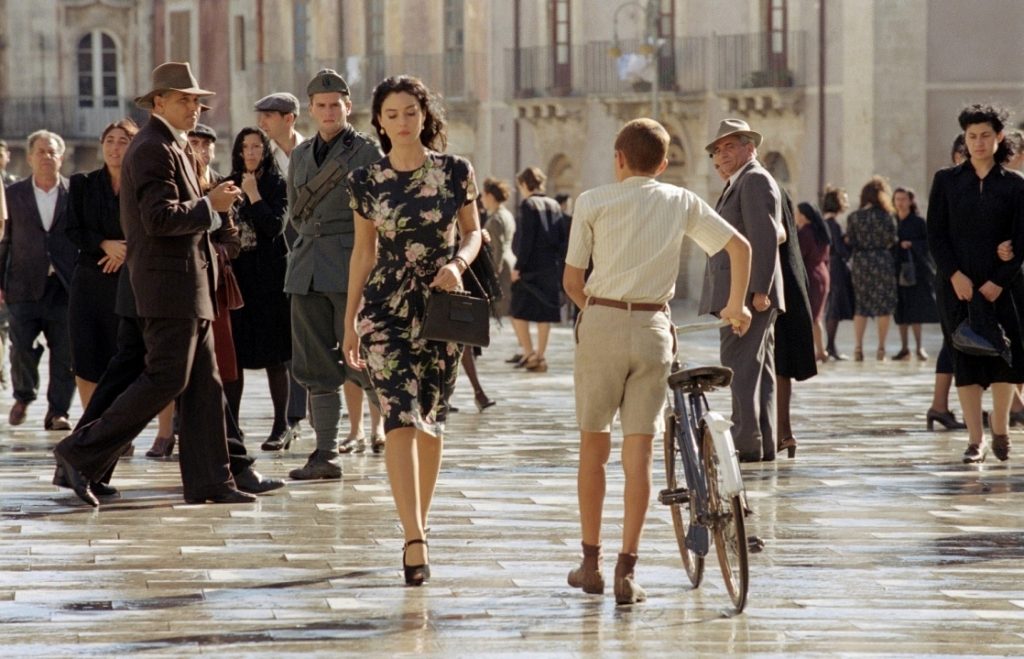 CINEMA IN SICILY: A GLANCE AT A CONTROVERSIAL AND PRAISED REGION.

Would you ever imagine that an island like Sicily and its tradition could considerably influence the history of cinema and many directors? I would not. However, believe it or not, there are many films set in Sicily and – buckle up – they don’t just deal with Mafia!

Let’s start with a film released in 2000 whose female protagonist is still discussed and loved today, directed by Giuseppe Tornatore and whose wonderful soundtracks are by Ennio Morricone: obviously, I am speaking of “Malena”.

In the film, nominated for two Oscars, the Italian actress Monica Bellucci plays the role of Maddalena Scordia, the most beautiful woman in the village where the story takes place, Castelcutò. What strikes us about this film is the theme it deals with and the situation it depicts: the mid-twentieth century women condition and the discrimination they have to face both by men and women. On the one hand, men consider them as objects, something that, if pretty, they can touch and treat like their own things. On the other hand, women are envious of each other, and if a woman stands out among the others for her beauty or her manners, she is doomed to be hated and discriminated. Basically, this is what we now call “slutshaming”: the act of making a woman feel guilty or inferior for her behaviour. All this considered, it’s not very different compared to nowadays, don’t you think?

Another film that provides food for thought is “I Vicerè”, directed by Roberto Faenza, inspired by the masterpiece written by Federico De Roberto.

The film talks about the events of the Southern Risorgimento, presented through the history of a noble family from Catania, the Uzeda di Francalanza, Spanish Viceroys’ descendants at the time of Charles V.

The story is told from the point of view of Consalvo, the son of the tyrannical and violent prince Giacomo. It is the display of the fall of the family “Borbone” and the changes – more superficial than real – that follow. The themes of the film are the flow of time and the decay, even if apparent, of a social class but the most important and impactful subject matter is the greed of men: man is driven to do whatever it takes to satisfy his greed, be it for power, money or sex. Don’t you think that today in politics money and power still affect the choices made?

The last film I want to talk about is “Il giorno della civetta”, directed by Damiano Damiani, based on the novel by Leonardo Sciascia. The story speaks of a murder that is committed in Palermo. The victim is Salvatore Colasberna and the leading character is Officer Bellodi who has to find out the motives behind the assassination. Throughout the story it turns out that the mafia ordered to have Colasberna killed because he is a building contractor and he refuses to grant a contract to a firm protected by Cosa Nostra.

The film explores several common themes in Sicily: the code of silence, the laws of organised crime which force silence on the perpetrator of a crime and on the circumstances of it. The work focuses on showing the corruption in every field: political, legal and ecclesiastical.

In conclusion, I really like these films because they show different sides of Sicily, with its strengths and weaknesses, from both a social and political point of view and, in some way, they allow to understand that these dark sides are intrinsic characteristics of all men.

I hope that in the future the situation in Sicily would improve in order to highlight the positive aspects that our island offers: starting with the beautiful landscapes, the countryside, the sea, the food and ending with the people who inhabit this astounding land.