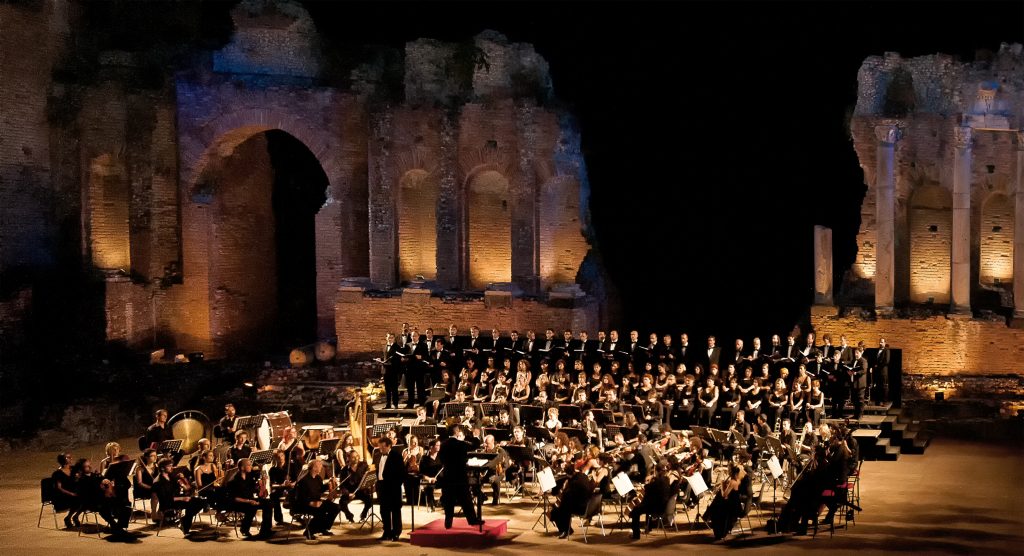 Chorus of the sicilian opera: an Oscar choir.

Founded in 2008, it is now considered one of the most important opera and symphonic choirs in Italy; since its inception it has been directed by the bass Francesco Costa, Oscar della Lirica 2016, with the artistic direction of the soprano Giovanna Collica and the presidency of the baritenor Alberto M. A. Munafò.

The special care for vocality and style and the versatility of its choir members, allows the Chorus to address both the sophisticated, symphonic and sacred music and the robust traditional repertoire.

Formed by Sicilian and southern Italian artists, it is regularly hired in theaters on the national and international territory with considerable success with audiences and critics.

Annually it realizes the “Canticorum Sacerdos Award” (among the winners Mons. Giuseppe Liberto and Mons. Marco Frisina), the “Sicanorum Cantica Award” (among the winners Fiorenza Cossotto, Marcello Giordani, Maria Dragoni, Luciana Serra, Denia Mazzola Gavazzeni, Dimitra Theodossiou, Pietro Ballo) and the Giuseppe Di Stefano International Prize (among the winners Jessica Pratt, Cecilia Gasdia, Giovanna Casolla, Elisabetta Fiorillo, Nicola Martinucci). Both events enjoy the appreciation of the Presidency of the Republic, the Senate, the Chamber of Deputies and the patronage of the Prime Minister and from 2020 the High Patronage of the European Parliament.

The intense concert season fits with the cultural activity: in this respect the Chorus has embarked on concentrated research, development and export of Sicilian Art at the national and international level. As well the Choir has rediscovered the most important Sicilian authors with the performance of lesser known or unpublished works of P. Mandanici, P. Vinci, G. Pacini, V. Moscuzza, F. P. Neglia, V. Bellini (in particular “Zaira“, with the extraordinary participation of some performers from the original cast of the world premiere in 1976). The Sicilian Lyric Chorus was responsible for the philological version of Zaira, presented in Catania at the Greek-Roman Theatre in September 2012. The Chorus has also made the transcription (with world premiere performances) of numerous Vincenzo Bellini’s autographs of a sacred nature from the composer’s youth of the “belcanto“.

The Sicilian Lyric Chorus performed in collaboration with the Pontifical Musical Chorus of the Sistine Chapel at the opening of the 2nd Special Assembly for Africa of the Synod of Bishops (October 2009), at the Basilica of St.Peter (Vatican City), in Rome, before Pope Benedetto XVI. The Choir collaborates with leading charities and regularly gives charity concerts. It has participated in various events broadcasted worldwide by RAI, by BBC and SKY, at the Cannes Film Festival, in the worldwide cinema circuits and has also performed in the presence of High Ecclesiastical, Civil and Military Authorities.

For its opera performances, the Choir was awarded – among others – of the Oscar of Lyric 2017, International Sicilian Prize “Il Paladino” on the occasion of the fortieth anniversary of that prize, Bellini Prize 2015, Belcanto Ambassador Prize, Academy of Arts Prize, Orfeo Prize, Sicilianity Award 2019.

It has performed in productions at the Teatro Alla Scala in Milan, Teatro Vincenzo Bellini in Catania, Chicago Opera, Teatro Regio in Parma, Teatro Carlo Felice in Genoa, Teatro dell’Opera in Rome, Teatro Regio in Turin.

With Cavalleria Rusticana it “baptized” Daniela Dessì in her debut in the role at the Ancient Theater of Taormina.

For the Luglio Musicale Trapanese it performed the opera “Mercedes” in World Premiere in collaboration with the Teatro Comunale di Bologna and made a DVD. It has recorded for Warner Classic and Amadeus. In 2019 it performed in Taormina with the well-known pop tenor Andrea Bocelli for the only Italian stop of his tour.

It is the organizer and producer of the Opera Festival of the Stone Theaters (“Festival Lirico dei Teatri di Pietra”), which takes place in the main archaeological parks of Sicily (ancient theaters of Taormina, Syracuse, Tindari, Morgantina, etc).

It inaugurated the Harbin Opera House, China, with a New Year’s Eve gala with the extraordinary participation of tenor José Carreras. In the same year it performed Aida and La Traviata under the direction of Franco Zeffirelli and was awarded the Golden Opera Award “International Opera Awards – Oscar della Lirica” during an event broadcast by Chinese state TV in front of a billion and a half of spectators.

Prestigious prizes and awards, collaborations with some of the most important conductors, directors and artists on the world scene, are some of the objectives achieved by what is now considered one of the most famous choral institutions at an international level, ambassador of Italian culture and European and standard bearer of the artistic heritage of the beautiful country and of Bellini’s eternal melody in the world.

Living with Covid-19, The world of business

An interview with Mario Bonsignore, the creator of English News -How has the pandemic changed your job?  “My communication and marketing job is completely different

DISCOVERING ARCHIMEDES: AN IMAGINARY INTERVIEW WITH THE ARCHIMEDES PARK MUSEUM DIRECTOR IN SYRACUSE.

Francesca: What a beautiful and interesting  park , a green and relaxing space , the ideal place for those who are interested in sciences and