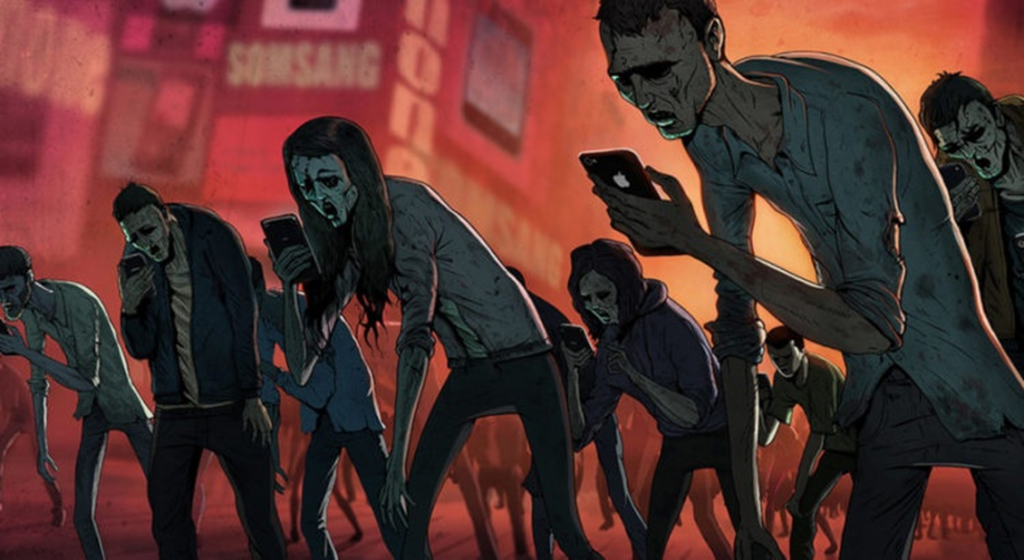 Nowadays we’ve often heard about the fact that mobile phone addiction is involving lots of different people, especially children and teenagers, but also adults who often use their mobile phone for work and to contact people all day long.

The telephone, which has now become a comfort, creates a real addiction that makes the mind obsessed and nervous in case of lack of it, even for a short time. Especially the teenagers of the twenty-first century can say that their smartphone is now a life partner. It is also used when you have nothing to do, even when you want to do a quiet activity like reading a book you use apps.

Along the street you may often find groups of friends who, despite being physically together, have their faces turned towards their smartphone screens.

School is also adapting to the new technologies in order to make us learn in the best way, but we’re realizing our socialization is worsening on account of this repetitive use of I.C.T, even in an environment of primary importance where education is involved, even at school. For example students used to carry out their own research in libraries, whereas now they only use internet and no longer have the opportunity to talk to other people exchanging ideas and information.

Surely the last two years of Covid-19 pandemic disease have almost compelled us to a constant use of mobile phones, since being locked at home 24 hours a day, video calls or messages were constantly used in order not to lose relationships, while even the school had begun to implement video lessons.

Children, from the age of three, instead of playing in a healthy way, started playing with their mobile phones under the “responsibility” of their parents. The chats have now become very private and consequently dangerous as they often turn into real tests if you want to target a person, whether for fun or for revenge.

Cyberbullying is indeed a new phenomenon which is becoming at the moment more and more widespread.

The mobile phone has also become a working tool for youtubers and influencers, who, followed by thousands of people, make their use of the smartphone get more and more obsessive. Even the older generations often find themselves having to learn how to use this “magic tool” to be able to communicate at all levels to all their friends, relatives and acquaintances.

Unfortunately the cell phone is also responsible for most of road accidents, in fact many people use it while driving without realizing the danger.

We also tend to have physical problems since the position of the back is going to bend and the shape of the hands is now going to change genetically.

But not only that, frequent use of electronic devices leads to little movement during the day and therefore many other health problems may arise from it.

Although we are aware of all the above-mentioned problems, getting out of this new form of addiction will be a real challenge. We do live in the era of “cellularmania” and we are the helpless victims of technology.