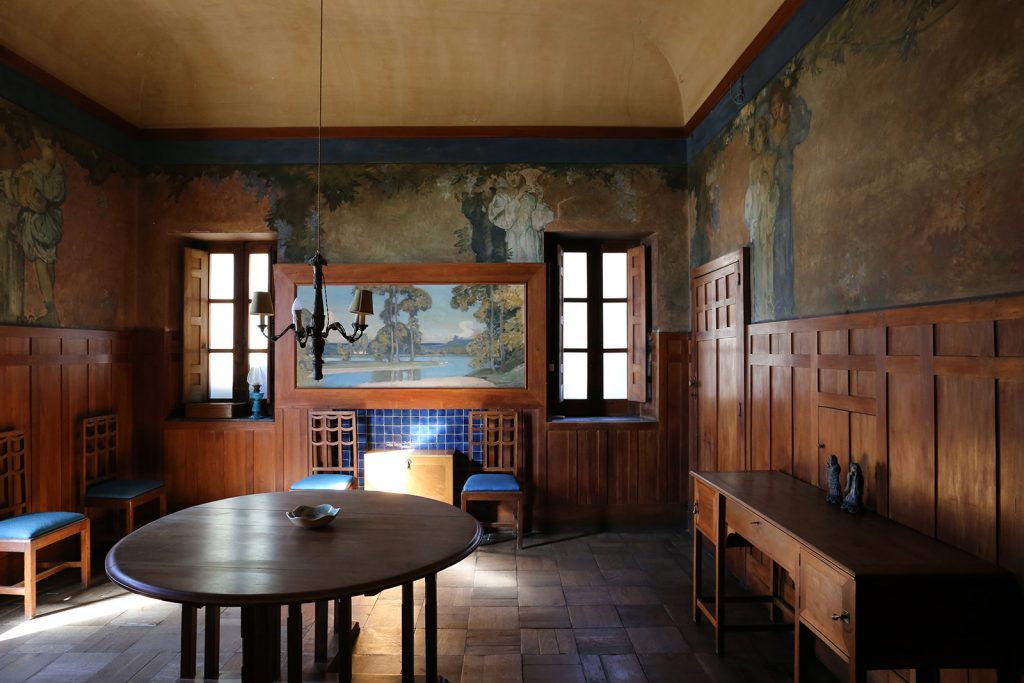 An interview with Francesco Spadaro, Director of Casa Cuseni Museum

Casa Cuseni is a delightful villa, designed and built for the British painter Robert Hawthorn Kitson, who arrived in Taormina in 1903 and fell in love with this enchanting town. The house preserves precious objects that Kitson collected on his many travels and it is well-known for its Camera Segreta, an entire room painted by the artist Frank Brangwyn. The subject matter painted on the walls depicts a special story, which was kept secret at the time, and Brangwyn’s mural is the only mural he ever created inside a private house.

In the first half of the 20th century Casa Cuseni was a residence for artists and scholars from all over the world, thus becoming an important International Artistic Centre. Today, it is the official Museum of Fine Arts in Taormina and its historical garden is part of the network Great Italian Gardens.

We would like to express our gratitude to Francesco Spadaro for offering us the opportunity to interview him and for taking the time to answer our questions.

Casa Cuseni was declared an Italian National Monument in 1998 and has been the official museum of the city of Taormina since 2015. What are the reasons that have led to these honors?

Casa Cuseni has been declared a National Monument of Italy because it represents an original architecture with features of Sicilian and Anglo-Saxon culture of the late nineteenth century. It is the museum of the city of Taormina because it preserves a monumental history of the culture of our territory, of the way things used to be. Casa Cuseni houses a great deal of fine art objects and several watercolors of the British experiences on the Grand Tour in Sicily and in the East. In fact, the name of the museum is Casa Cuseni Museum of Fine Arts and of the Grand Tour of the city of Taormina.

The British painter Robert Kitson built the manor and turned it into his own private dwelling, where prominent figures from the world of culture were hosted. What tangible evidence was left by the people who stayed in Casa Cuseni?

During its century of existence, the Villa has welcomed celebrities from the world of art, such as Pablo Picasso, Salvador Dalì, Roald Dahl, Danilo Dolci, Tennessee Williams and Henry Faulkner. The museum contains a number of works by these masters and artists who shared their traveling experiences. We preserve documents regarding Nobel laureates in literature, archives, photographs, sculptures, paintings, objects that visitors and the owner brought from their travels in Europe, North Africa, India and Japan. Ernest Hemingway wrote his first short story here, and historians and philosophers found an ideal place to think and write.

Inside the residence there is a “secret chamber” with fresco painting concealed at that time, and its existence was kept in the strictest confidence for over a hundred years.  What is this about?

In 2019 this room was acknowledged as the best example of the Arts and Crafts movement in the world outside of Great Britain, where the style originated in the second half of the 19th century thanks to William Morris.

It was an apprentice for William Morris, Frank Brangwyn, who created this interior design; it is a dining room, kept hidden for over a century because it represented a forbidden story. At the time of the earthquake that significantly affected Messina in 1908, the owner and his partner (a homosexual couple) adopted a child.

Frank Brangwyn described this story with a mural painting in the secret chamber, but Ezra Pound discovered this chamber in 1924. In order to save the reputation of Frank Brangwyn, who was painting the Royal Gallery of The House of Lords at Westminster Palace (1924-1926), the room was closed to visitors. Homosexuality was strictly forbidden in England; therefore, they preferred not to show these murals. The room was not reopened until 2012.

The manor is also a part of the Associazione Nazionale Case della Memoria. What distinguishes Casa Cuseni from the other “Houses of Memories” in Sicily?

The excellent state of preservation. Opening a drawer, we can still find the letters of the artists that lived here, and their creations hung on the wall. Throughout its century of existence this Monument has fully maintained its uniqueness. That has never occurred in any other Sicilian monument which is privately-owned and open to public use.

Casa Cuseni is undoubtedly an extraordinary place that enhances and promotes the City of Taormina. What feelings do tourists usually experience when they visit the villa and the garden renowned for its portrayal of the spiritual world?

This monument captures the imagination of the visitors not only for its original architectural designs by Giacomo Balla and Fortunato Depero, the only ones known in the world within a garden, but also for its magnificent views.

The Gulf of Naxos and Mount Etna are the main features of this scenery but, to point out that we are in Magna Graecia where fire and water are important elements, the designers of Casa Cuseni built the entire Garden from a unique perspective: all the fountains of the Villa (water) are aligned with the fireplaces of the House (fire).

Casa Cuseni is a brilliant work of architecture but also of symbolism and spirituality.