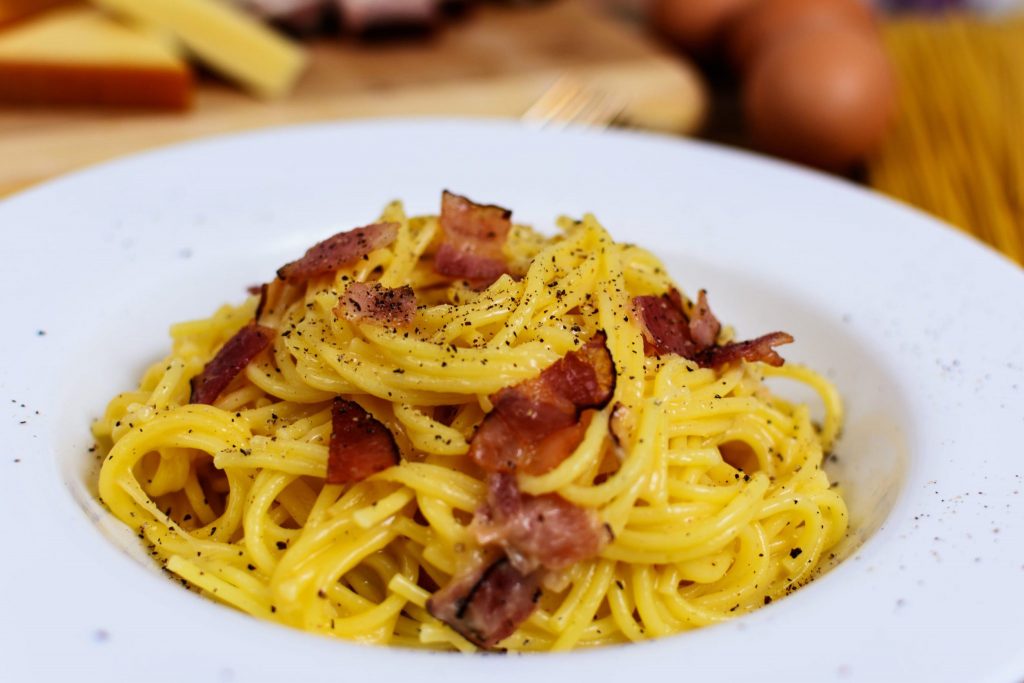 Carbonara is a very common dish in Rome, although the origins of this dish are very uncertain. The most used types of pasta are spaghetti and rigatoni.

The first dish was remembered for the first time after the liberation of Rome in 1944.

It would seem that during the Second World War the American soldiers who arrived in Italy changed the ingredients to those they managed to find, then eggs, bacon, and spaghetti. According to Marco Guarnaschelli Gotti “when Rome was liberated, the food shortage was extreme, and one of the few resources was the military rations, distributed by the allied troops; eggs and bacon, that some genius has mixed everything thus seasoning the pasta. Renato Gualandi, on the other hand, was a young Bolognese cook who in 1944 on the occasion of the meeting between the American Fifth Army and the English Eighth Army, created a dish similar to carbonara. This period carbonara spread a lot in the capital.

According to another hypothesis, the dish was “invented” by charcoal burners in the L’Aquila area where they prepared it using ingredients that are easily available and stored.

Carbonara is the evolution of cacio e ova.

Carbonara could originate from Neapolitan cuisine which uses ingredients similar to those contained in Carbonara; for example: a beaten egg, cheese and pepper.

In the United Kingdom, bechamel is used instead of egg.

In Japan, cream is not used but pecorino.

In Spain onion and champignon are used and the bacon is replaced with bacon.

In the United States, tomato sauce is added.

April 6 is Carbonara Day, a day dedicated to this dish known all over the world.