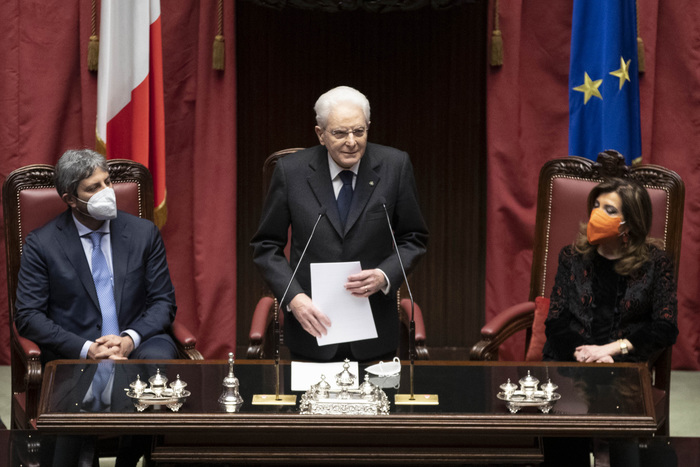 President Sergio Mattarella said after being sworn in for a second term Thursday that “parliament and the representatives of the regions have done their bit. It is a new call for me, an unexpected one, to responsibility, to which I cannot and will not shrink”.
Noting that parliament was the ultimate expression of the popular will, the head of State said “my thoughts, at this time, go to all the Italian women and Italian men, of all ages, of all regions, of all social conditions, of all political leanings.
“And, in particular, to those suffering the most, who are awaiting from the institutions of the Republic a guarantee of rights, reassurance, support and concrete responses to their discomfort”.
“When the speakers of the House and Senate told me the outcome of the vote, I spoke of the urgences – health, economic and social – which are calling to us. WE cannot afford delays or uncertainties.” Mattarella stressed that “the fight against the virus is not over, the vaccination campaign has greatly reduced the risks but we cannot afford to lower our guard”.
He went on: “We are living through an extraordinary phase in which the political agenda is largely defined by the shared strategy at the European level. Italy is at the centre of the commitment for recovery in Europe. We are the biggest benficiaries of the Next Generation programme and we must relaunch the economy while aiming for sustainability and innovation, within the framework of the digital and ecological transition.
“We must design and start to build, over these next few years, the post-emergency Italy. It is still time for a common effort to make Italy stronger, well beyond the current difficulties. A fairer, more modern Italy, intensely linked to the friendly peoples that surround us.
Italians’ hopes and expectations, said the president, “would have been strongly compromised by the continuation of a state of deep political uncertainty and tensions, whose consequences could have jeopardised decisive resources and the prospects of relaunching a country working to emerge from a condition of great difficulty.
“I read this awareness in the vote of the parliament which concluded the tortuous days of last week.
“This very awareness is the reason for my saying yes (to be re-elected), and it will be at the centre of my commitment”.
Saying that Italy must “steer the processes of relaunching Europe”, Mattarella thanked Mario Draghi’s government which is aiming to “overcome the emergency” and urged political parties to refrain from further “shows of force” since “we need to agree”.
Among other things, he said that a “profound reform” of the justice system was needed to regain “profound rigour”, also calling for an end to factionalism in the judiciary’s self-governing body which he heads, the Supreme Council of Magistrates (CSM), spurring one of the many standing ovations he received for his speech.
Saying that citizens needed “trust and not fears”, Mattarella also said he was grateful to Pope Francis and Italy had “great respect” for his teachings.
Mattarella added that schools must know how to welcome students and ensure equal opportunities for all.
The 80-year-old Palermo-born former Constitutional justice and three-time ex-minister was re-elected Saturday after six days of stalemate among Italy’s political parties forced them to beg him to reluctantly set aside his retirement plans.
Mattarella, the second most-voted president after ex partisan Sandro Pertini in 1978, is the second Italian president to be re-elected after Giorgio Napolitano stepped back in after similar deadlock in 2013.
It is not known whether Mattarella intends to serve a full seven year term again.
Napolitano, 87 when he started his second term, only stayed on for a couple of years.
Former leftwing Christian Democrat Mattarella, whose brother Piersanti was slain by Cosa Nostra in 1980, will deliver an inaugural address that is expected to focus on boosting Italy’s role within the EU.
The president is a largely ceremonial figure representing national unity and upholding the Constitution as a sort of moral compass, but the person can wield power in government crises by naming premiers and rejecting ministers, as Mattarella did in scotching Euroskeptic economist Paolo Savona as economy minister in 2018, while presidents are also empowered to ask parliament to reconsider legislation.
Matteralla was re-elected Italian president Saturday on the eighth ballot of 1,009 MPs, Senators and regional representatives, easily passing the 505 vote majority needed.
He got 759 votes out of a total of 983 voters, compared to the 665 he garnered in his first election in 2015.
The grand electors reassembled for then swearing in at the Lower House Thursday.
Mattarella drove down the Quirinale Hill to parliament flanked by throngs of well-wishers holding placards saying “Grazie Presidente”.