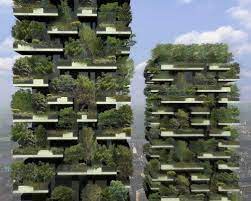 Bio-architecture and the Vertical Forest

The Vertical Forest is an example of bio-architecture which focuses not only on human beings but also on the relationship between humans and other living species.

The first prototype of Vertical Forest in Italy is in Milan in the Porta Nuova area, in the business center of the city. It consists of two residential tower skyscrapers 76 and 110 meters high, designed by the architect Stefano Boeri, which host over hundreds species of trees, providing an amount of vegetation equivalent to 30,000 square metres of woodland and undergrowth, concentrated on 3,000 square metres of urban surface. Unlike “mineral” facades in glass or stone, the plant-based shield does not reflect the sun’s rays but filters them creating a welcoming internal microclimate without harmful effects on the environment.

It is a metropolitan reforestation project: the vegetation regulates humidity, produces oxygen and absorbs carbon dioxide and fine dust.

The conception of the Vertical Forest is that of being «a house for trees that also hosts humans and birds».

The combination of these characteristics has earned the project important awards including the INTERNATIONAL HIGHRISE AWARD in Frankfurt (2014) and the CTBUH Award in Chicago (2015) as the most beautiful and innovative skyscraper in the world.

The two towers of the Vertical Forest, the De Castillia tower (tower E) and the Confalonieri tower (tower D), are connected by an L-shaped base.

Both structures are characterized by the presence of reinforced concrete balconies that protrude irregularly on all four sides of the buildings.

The offset of the balconies, in addition to giving dynamism to the profile of the forest, allows the settlement of trees up to 9 meters high.

The Bosco is clad in large-format porcelain stoneware panels in gunmetal gray, similar to the color of the bark, and white alternating with the large windows.

The Vertical Forest is equipped with an energy dispersion system that limits the vibrations coming both from the railway transit of the underground lines and from the seismic waves in the event of earthquakes.

The façades of the Vertical Forest are home to 711 trees, 5,000 large shrubs and 15,000 perennials. In total, there are 94 different plant species: 59 are useful for birds, 60 are arboreal and shrub and 33 are evergreen.

From the faunal point of view, the Vertical Forest protects biodiversity through the creation of biological habitats: the numerous plant species distributed along the facades constitute a real ecosystem that attracts birds and insects.

A peculiarity of Bosco Verticale is the iridescent polychromy of the trees that cover its surfaces. The tree species, with the succession of the seasons, renew their colors: during the spring they take on delicate pastel shades, while in the autumn the warm colors emerge more.

The distribution of the plants has also been studied and have been placed following various criteria of a formal and aesthetic nature (ornamental quality, flowering seasons, potential allergenicity, ease of maintenance). The evergreens were placed on the southwest side, while the stripping species were arranged on the northeast side.