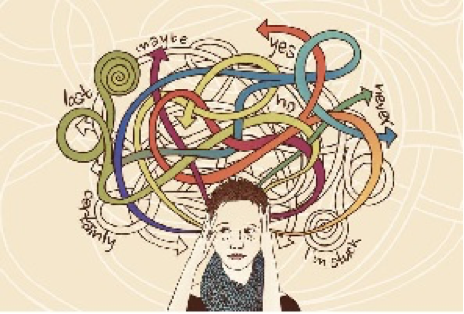 ANXIETY: ALL THERE IS TO KNOW.

Anxiety is a normal part of our life, and it is fundamental especially for animals. We see it as a bad thing to run away from and hide out from, but for zebras or gazelles, it is essential to survive.

The science behind it

When the prey sees the predator, their amygdala, which is the emotional center of the brain, detects the danger and triggers the release of adrenaline throughout the body. This process prepares the body to fight or to flee.

Their heart races, their breathe speeds up and their lung passages expand, all to ensure that enough oxygen gets to the muscles that get tense and are needed to fight or to flee. At the same time, they stop salivating and systems, like the digesting one, shut down in order to prioritize the other functions.

Our nervous system reacts in the same exact way, and this is the reason why, when we are feeling anxious or stressed out, our heart races, our muscles are tight, our stomach aches and our mouth is dry.

For humans, anxiety might derive from several issues: the work we still have to finish, the next exam we are not prepared for yet, speaking in front of many people, or confessing our love to someone. The problem is we cannot escape our daily problems by running away or by fighting, so this perfect adaptation of the body in stressful situations is useless.

However, anxiety, most of the time, is the only thing that fights procrastination, a mechanism that settles down in our brain and makes us avoid working. At one point, when we are close to our “deadline”, anxiety forces us to take a step forward.

The question is, when does anxiety stop being a positive emotion? Unfortunately, those who suffer from severe and chronical anxiety experience the so-called “panic attacks”. These crises occur because their amygdala is over-sensitive and releases too much adrenaline.

Although our levels of anxiety are mostly determined by genetics, a traumatic event can seriously affect us. If a child was exposed to domestic violence, as an adult he/she is likely to have serious trust issues and to be over-protective of the people close to him/her.

Moreover, recent statistics have shown how school is influencing young people about their calmness. Students are constantly under pressure, and it is because of bullying, social differences and competition.

The grading system is used to award good students and to underline the difference between the “bad ones”. Is it really a good idea to assign to every student a mark, though?

Grades push young people towards an unhealthy education because they become the goal itself. The school system is not about learning anymore, but it is about getting high grades for the job of our dreams. All this persistent judgment is frustrating and the percentage of anxious students increases day by day.

We all know that anxiety makes us prepare more effectively for a test, but sometimes we tend to exaggerate.

The remedies during the centuries

In Ancient Greece, only women were considered to suffer from anxiety, indeed, the term hysteria finds its root in the noun hystera, which means “uterus” in Greek.

The ancient Greeks thought there was a “female semen” stored in the body that, due to a lack of sexual intercourse, would turn to a poison responsible for the panic attacks. Therefore, sex was referred to as the cure.

In the Early Renaissance, things got even more absurd: women who were very anxious and experienced panic attacks were considered witches and they were either tortured or burned alive.

During the Victorian Era, women used to go crazy because they spent most of the time in the house. Their husbands, consequently, sent them to a local asylum where they were treated with electroshock and in the worst cases ‘cured’ with lobotomy.

The turning point came with the American Civil War Era, because the world understood that anxiety could affect everyone and not only women. Soldiers felt fearful during the war, but the worst came when they were back home (for those who did). Veterans were likely to suffer from post-traumatic stress disorder (PTSD), and tried to treat it with opium, that was and is only a temporary and ruinous solution.

In the 1960s, doctors thought antidepressants could be effective as a treatment for anxiety and depression. Only in 1990, it was discovered that antidepressant-type drugs worked on anxiety due to depleted numbers of the neurotransmitters responsible for bringing “happy” chemicals like dopamine and serotonin to the brain. In fact, people that make a constant use of antidepressants, have a ‘lost look’ in their faces and live a never-ending phase of apathy towards the outside world. Neither concern nor happiness, they just do not feel anything.

These days, meditation is seen as one of the best methods to relieve stress and anxiety, even if it is not considered as an option by many.

Sadly, most of the times people find it easier to take medications and to fight their demons on their own.

The individuals with an anxiety disorder (or other types of disorder), try to hide their feelings and it is often hard to detect their real emotions or concerns. For this reason, treating all people with kindness and respect is the key to make a difference in everyone’s life.