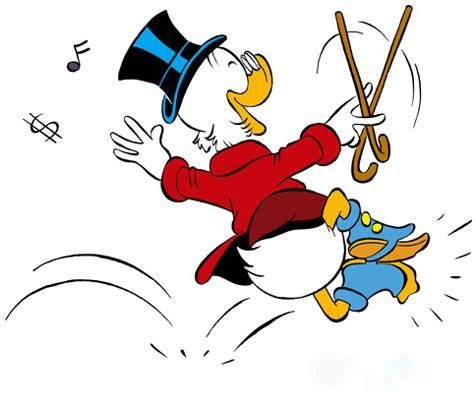 I cannot believe that! I’m having dinner with the richest duck in the world!

Surely you all know the Disney comic and cartoon character, Scrooge Mc Duck, who appeared as the protagonist in thousands of comic stories made in various countries of the world and in dozens of cartoons. He is one of the most beloved and most successful Disney characters in the world, despite his stingy and greedy character.

Now we are sitting at the table and I don’t want to miss the opportunity to ask him a few questions… let’s get started!

We all know that you are the richest duck in the world, but how did you manage to become one?

I managed to become one thanks to gold around 1900’s. So, I decided to expand my business by buying banks and founding several companies: a sawmill, a fish oil company and a shipping company.

We all know you a little bit for your selfish character towards your money; you have a good reason for being so attached to it?

Of course I have one! I experienced hunger and poverty as a young man. I was a gold digger in the Klondike: region of the Yukon Territory in northwestern Canada, just across the eastern border.

From that experience on, I no longer gave superficiality to money; indeed it has become the most important thing in my life, even more important than my nephew Donald who always makes me exhausted together with those three pests of Qui, Quo, Qua.

How did you earn your number one?

I earned my precious number one on my 10th birthday, when I received a shoe shine kit from my father, so that I could start working to become one day someone: that same day, the American billionaire Howard Rockerduck (father of my opponent), passing in a carriage through the streets of Glasgow and seeing children begging for alms, he threw them some change; one of these was picked up by my sister, who took it to her father, who lent it to trencher Burt so that he could introduce himself as my first client and pay me with an American currency, not spendable in Scotland, to teach me the important lesson of staying always on the alert.

With all your money you have also founded a city, which you have decided to call DuckBurg: where Donald Duck, Qui Quo and Qua, Daisy Duck and other characters who are part of the “gang of ducks” reside. What changes has this city had over time?

Of course DuckBurg has undergone some changes. At first, it was a small provincial town with a thriving metropolis, but after my growth as the economic heart of the city, starting from the 70’s it became a medium-sized town, while at the end of the 80’s it not only became much larger but it was also enriched with futuristic buildings and skyscrapers. In a short time, it has made a great progress.

With your temper, I think you have quite a few rivals, but there has always been one in particular with whom you will never stop fighting over who is the best. As you will have understood I am speaking of Rockerduck, but how and why did this rivalry arise?

Rockerduck … just hearing his name makes me sick! Our rivalry stems from the fact that I am an eighty-year-old billionaire born in misery who likes to cheer others up, while Rockerduck is a young entrepreneur who inherited all his stupid fortunes and thinks he is superior only by virtue of money. We despise each other.

Now I have removed all my doubts about the famous Scrooge McDuck and it is time to say goodbye and thank him for answering all my questions. I still can’t believe he didn’t ask me to pay for dinner … maybe he liked me! Better that way I wouldn’t want to find myself up against such a cunning duck!