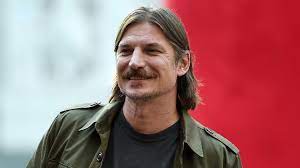 AN IMAGINARY INTERVIEW WITH LUKA PEROS.

Reporter: Hi Luca, how are you?

R.:  we know you speak so many languages…

Luka : oh yes, I like studying foreign languages, I’ve travelled a lot in my life  and I have lived in many places including my hometown but also Vienna, Boston, Abu Dhabi, Los Angeles and Barcelona, that’s why I speak so many languages !

Reporter: let’s remind our  public you are the actor who plays Marseille in the Paper House. You are very tall… How old are you?

Reporter: what studies have you done?

Luka:  Before becoming an actor, I  graduated from Emerson College in 2000 with a BFA in Performing Arts, acting major. Then I worked at the Zagreb Puppet Theater and the Croatian National Theater in Rijeka. But in addition to being an actor, I had  experiences as a voice over, voice actor.  I want to thank  La casa di carta, the TV series, because I have some success thanks to this experience there.

Reporter:  Now let’s talk about Luka Peros’ private life, which we have been able to understand around the web and through your voice and  social profiles. Ivana Popović, a Croatian artist, is the woman you met in 2003 and who made you father  for the first time.

Luka: yes, I’ve loved Ivana , she   already had a daughter, Luna,  I’m  very fond of. The love affair with Ivana Popović ended in 2006 and then I met Paula Feferbaum, a Brazilian designer. We got married and had a son, Daniel Louis.

Reporter: where do you live now?

Luka: we have been living   in Barcelona since 2017, together with Ava, my first daughter, who moved in with me following the tragic death of her mother.

R.: well, thank you so much, Luka, congratulations! Bye