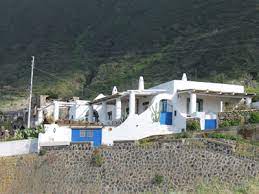 It refers to the traditional buildings typical of the Aeolian Islands, the Italian archipelago of Sicily, recognized as a World Heritage Site.

In past centuries, the Aeolian house consisted of a single cubic or parallelepiped-shaped room, with a single entrance door and two round windows with bars and placed on the sides of the entrance. It was a construction that responded to the needs of defense from external dangers. Inside, in the only room, on one side there was the kitchenette (cufularu) and on the other the beds.

The basic unit is the modular cube to which other cubes can be added horizontally or vertically, depending on the needs of the family. The result is a compact construction, in the shape of a parallelepiped with one or two floors, with numerous doors and windows to allow the passage of air.

The building materials used are stones or lime without the use of cement. Materials of local origin are used: blocks of lava stone for the foundations, pumice stone for the external walls and tuff to pave the terraces.

The “BAGGHIU” – the beam is the terrace that opens in front of the house, as wide as the house and with a length equal to the height of the house itself. This space is used for rest in the open air and for typical jobs such as the drying of figs and pasa grapes.

The “BISOLA” AND “PUSATURI” – The bisola are stone walls that delimit the terrace and are used for seating and are often majolica. At the extremities they have a quarter moon shape called pusaturi of such a shape that you can rest your head when you lie down on the bisola.

The “PULERA” – They are the cylindrical columns placed at the edge of the terrace and support the loggia.

The “LOGGIA” – It is an intertwining of wooden beams that rests on the pulera and is covered with reeds and climbing vines. It serves as a cover for the terrace to give shade during the day and protect from humidity in the evening and is positioned lower than the roof of the house.

THE “ASTRICU” – It is the roof, perfectly horizontal, supported by wooden beams and composed of solar beaten, that is, a material made of lime and volcanic lapilli beaten with wooden pestles. The solar battuto isolates the house from the winter cold and the summer heat. The roof is used for the collection of rainwater through large amphorae.

“PILA” AND “PRINCU” – The pila is located outside the house and is the tub for washing clothes. The “princu” is the lavatory in lava stone to be placed on the pile.

The “FURNU” – It is the dome-shaped oven used for baking bread and cakes, positioned outside the house on one side of the terrace above a base used to store firewood.

The “VAGNU” – It’s the bathroom. In the past it was always positioned outside the house on the north side, while today it is located inside.

Characteristic of the Aeolian houses is also the brightness of the colors: the white of the plaster, yellow and pink.

Arranged around the Aeolian house you can find other typical rooms used by the family: the cellar, small mills to grind barley and wheat, the palmento (mill for pressing the olives), the pinnate (stalls closed only on three sides) and the pagghiara (basement stable of straw and stone).

Even the interior of the Aeolian houses reflects the concept of essential and functional life: few and simple furnishings, objects of daily use, the maidda (wooden container where bread is kneaded), the scanaturi (wooden board on which bread is worked ) and the criu (sieve).