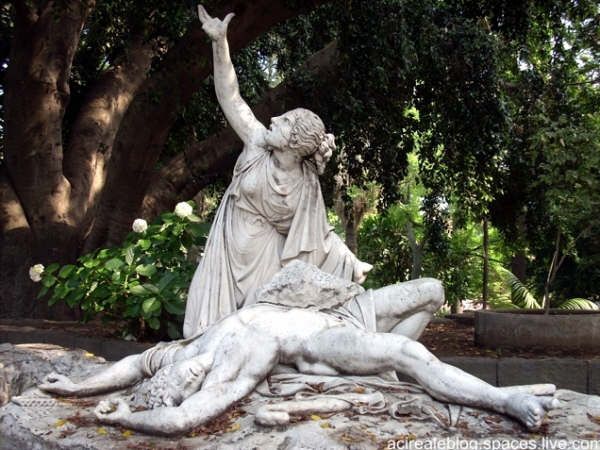 What we are about to tell you is one of the most beautiful and tragic stories of antiquity, set on the slopes of Etna, a mythical and magical place, where the earth melts and regenerates itself in a breathtaking landscape that flows into the sea.

A beautiful nymph, with milk-colored skin, daughter of Nereo and Doride with whom Polyphemus, the Cyclops told by Homer in the Odyssey, had fallen madly in love. One day a little shepherd named Aci, son of Faun, while he was grazing his flocks near the sea, saw the beautiful nymph and fell in love with her.

Polyphemus, seeing himself refused despite the numerous advances and the numerous love verses he dedicated to her beloved, one night, mad with jealousy for having surprised them together embraced in a cave close to the sea, decided to take revenge by killing Aci.

The terrible Cyclops took a huge pointed boulder from Mount Etna and threw it on his rival, killing him. The nymph who in the escape had thrown herself into the sea, as soon as she saw the tortured body of Aci, asked Zeus and the gods to transform the blood of her beloved into a river in which she could immerse herself to rejoin her great love.

According to the myth, this was how the ancient Aci river originated, a short stream of water that can no longer be located today due to the various and continuous eruptions of Etna that have canceled its course.

The popular legend also tells that the young shepherd’s body was dismembered into nine parts which then fell where the 9 towns were born which bear the word Aci in their name: Acireale, Acitrezza, Acicastello, Aci San Filippo, Acibonaccorsi, Aci Sant’Antonio, Aci Platani, Acicatena, Aci Santa Lucia.

A tragic love story, as the myth has accustomed us by now, but we like to think that the love between Galatea and Aci continues today between the waters of the Ionian Sea and those of the Akis river, hidden and forever away from envy of the Cyclops Polyphemus…