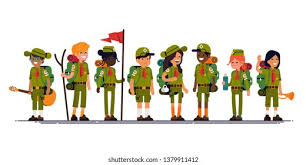 Adolescence is an age where  principles such as solidarity, altruism, legality, democracy, anti-racism become fundamental and the actions should be aimed at spending oneself to help those living in situations of marginalization and hardship.

The educational teachings of the Scouts are at the basis of the scout path.

Today we’re at the park talking with some Scouts to better know this group .

-What is scouting today with its international dimension?

Scouting is an educational, voluntary, non-political movement for all young people without any distinction.

Who was the founder? It was  the English general and educator Robert Baden-Powel in 1907, who had theorized the basics of Scouting during the Second Boer War in South Africa.

Scout have  the method of learning by doing among nature, and in 1899 Baden-Powell’s first book «Aids to Scouting» was published, which recommended the so-called “scouts” as training reading for explorers.

-When can you enter scouts?

In scout groups you can enter at 8, but until 11 you are not really a scout, but cubs or ladybugs. These names recall the fantastic environment that will be experienced during the outings.

-What are these cubs and who do they inspire from?

The cubs are inspired by the adventures taken from the novel “The Jungle Book” by Rudyard Kipling. The groups are called packs and the leaders are Akela, the wolf and Bagheera, the black panther. She greets herself by saying “Good hunting” The ladybirds will instead be immersed in the magical world of the Wood of the book “Seven black points” by Cristiana Ruschi Del Punta. Here the leaders are: Arcanda, the great eagle, and Scibà, the snake. And the group is called the circle. Here the greeting is “Good flight”.

You become explorers or guides, that is you become part of the “department” which is divided into sub-groups or “squadrons”. Here we abandon the fantastic game for activities that can be practical tasks: cooking, cleaning … or adventurous, especially during the fields (i.e. the outings of a few days usually in tents): building stilts, exploring a forest … The novice explores the way of living Scouting in an age in which choices become fundamental for the life of the adult.

– What are the two main associations?

The two main Italian associations are: Agesci which stands for the Association of Italian Catholic Guides and Scouts and the groups are linked to a parish; Cngei, on the other hand, is the National Corps of Young Italian Explorers and Women and differs from the first for its non-denominational character. But the principles and methods are common. The FSE – Federation of European Scouting, which includes the Italian Association of Catholic Guides and Scouts of Europe and is the second in Italy for the number of subscribers.

Students: thanks for this interview, bye !