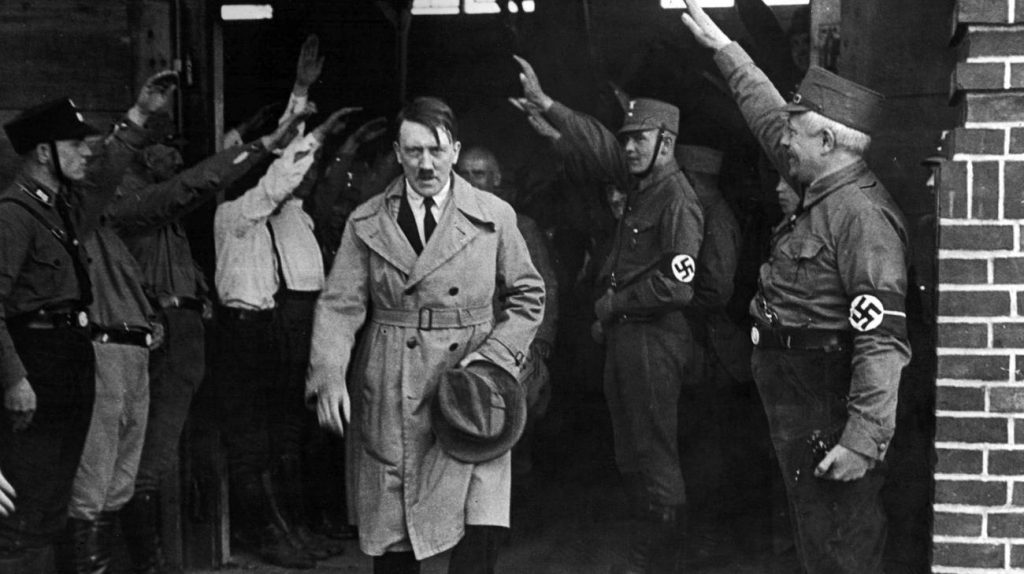 A “QUITE IMPOSSIBLE” INTERVIEW WITH ADOLF HITLER.

Let’s start talking a bit about your life, your childhood, your studies and how you got where you are.

HITLER: I’m… rather, you already know me well. I was born in Braunau in 1889. At the age of 15 I failed school, then I moved to Vienna three years later, and there I tried to enrol at the “Academy of Fine Arts”, but they rejected me. For a few years I earned my living as a painter and decorator. I felt I had made the wrong choice, but when I decided to take an interest in politics, my ambitions changed. I joined the German Army as a volunteer in the First World War , with the rank of Corporal.

In 1918 a lethal gas was about to blind me in the battle and when Germany surrendered, I was hospitalized  because of a serious depression. Since that moment I came up with the belief that Germany had lost  because it was reneged on the inside by  socialists and Jews, so I decided to continue my political course.

JOURNALIST: Have your ideas of racial discrimination been influenced by the hostility you developed towards Socialists and Jews? How did you manage to earn the people’s trust?

HITLER: Exactly,in1920 I became leader of the German Nazi Party and I found out that I had two remarkable talents: Oratory and the ability of inspiring confidence in people.

The humiliation felt by Germany after the First World War and its consequent redemption’s need made my assignment very easy to count on the German people’s discontent.

When we Nazis attempted to conquer power, on the 8th November 1923, I was sentenced to 5 years in prison.

JOURNALIST: Tell us more specifically about your book ”Mein Kampf”, written during the years of imprisonment.

Hitler: Essentially my book explained the future plans for Germany. As you well know, the need to colonize other countries represented our most important target, as the Germanic people needed space where they could thrive, without being contaminated by other races. The Jews have never been nomads, but always and only parasites who infested those spaces rightfully belonging to other people. The Socialists and the Communists represented other enemies to defeat then, because their ideas denied concepts such Class and Nation, two founding elements of Nazism. The only purpose was to maintain a pure race and create the best conditions for war, the only thing that can give a nobler meaning to the existence of  people. The “Aryan” is the most valiant race of all, the only one which has the right to rule the world.

JOURNALIST: There are many ways to assert one’s ideas, but you chose the cruelest, refusing any possibility of dialogue or confrontation. Can you rule out the possibility that it was the poverty of valid arguments that led you to commit the worst of crimes?

HITLER: I killed and exterminated for the only purpose of creating a perfect race.

JOURNALIST: Can you explain to us the basic concepts that have led you to extreme your political figure, almost substituting the Divine Judgment, arrogating to yourself the right to define an absurd concept like that of the “superior race”?

HITLER: The fundamental features of a person are determined by the race.

I believe that all world races have traits immutably transmitted. As a consequence,  who did not conform to my  point of view or who I considered a threat for the purity’s race had to be removed, like all the parasites who were openly opposed to the Nazi party. The “Arian” Germans instead had to expand and to command, otherwise they would have been sentenced to  extinction.

JOURNALIST: Have you ever left your office to realize the consequences of your ideas over the outside world?

HITLER: I was perfectly aware of what was happening outside, but I had to complete my aim,regardless of the consequences.

JOURNALIST: Many of us are scared even to pronounce the word “Genocide”. Have you ever felt remorse for what you did?

HITLER: To tell the truth, no. I only did what I considered right for me and for the whole Aryan race

JOURNALIST: A question naturally arises: Do you think you have a heart? Have you ever been in love?

HITLER: Many womenfell in love with me, I had many lovers, but I never fell in love with any of them. In my opinion the equality of the sexes is only a strange invention. The only woman’s purpose is giving birth and educating children.

JOURNALIST: Have you ever felt any remorse to have taken the life of so many innocent people, among which women and children?

Coronavirus: why did you come into the world?

It would be a little strange to interview something that is invisible and above all evil, but if you are a curious person such an

It seems hardly possible to talk about violence of any gender in 2021, but worldwide it is still a lively and discussed topic, and Italy

An interesting (and imaginary) talk to Jane Goodall

Jane Goodall is an English ethologist and anthropologist and is known around the world for her studies on chimpanzees in Africa and her environmental commitment.

LIVING WITH COVID-19; THE EFFECTS OF THE PANDEMIC ON PARENTS AND FAMILY LIFE.

The covid 19 pandemic has had  many negative  but alsosome  positive consequences in the lives of all of us. So let’s find out what effects

A JOURNEY THROUGH THE LEGENDS OF FAITH, TODAY’S SAINTS.

Alfio, Filadelfo and Cirino were three brothers, born in Vaste, in Puglia and killed in the era of persecutions and for this reason they are

In Rome, in the Monteverde district, there is a small library where you would never expect to find it: in an abandoned refrigerator. “Waiting for