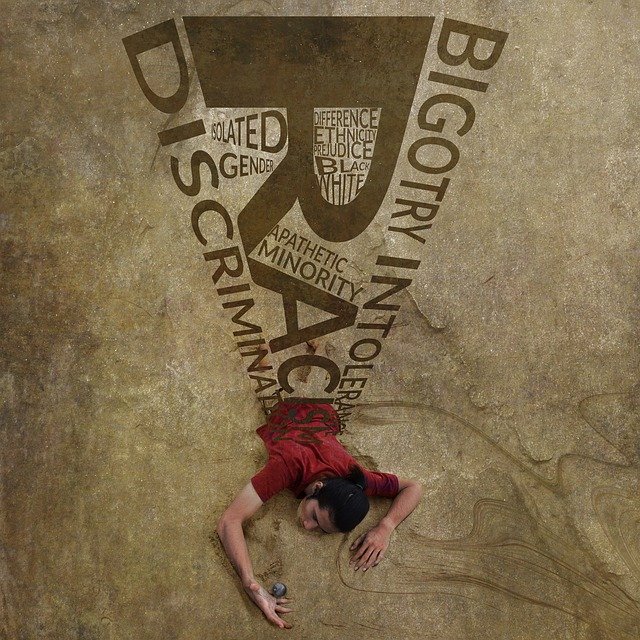 A MESSAGE OF HATE: DISCRIMINATION. LET’S FIGHT AGAINST IT!

Discrimination is a very bad practice: it happens when you unfairly treat a person or a group of people differently from other people. Those who discriminate usually judge and attack people according to prejudices based on their race (color of their skin, for example), nationality (origins, different culture, language), social status, sex orientation, physical appearance, religion, age, disability and gender,too.

That is a longstanding theme but it is also a very current topic that is still the cause of unfair episodes and a lot of anti-racism protests. For example, in the United States of America statistics reveal that there are more black people killed by police than white people and some of these murders seem to be unjust and with no real reason. We all still remember the anti-racism protests to condemn what happened to the Afro American George Floyd last year: on that occasion the police was called because he had probably bought some cigarettes with a fake $20 bill but then videos show police officers doing actions that violated the policies of the Minneapolis Police Department: those violent actions against Mr. Floyd left him unable to breathe, even if he asked for help. In order to condemn such terrible unjust episodes of free violence against black people there is the international social movement Black Lives Matter that is still fighting racism and anti-Black violence, especially regarding the police brutal ways of acting and it is still demanding society to give the same value both to the lives of Black people and to the lives of White people: the same value to all ‘human beings’ beyond the skin colour and beyond differences.
All of that let us think that even if racial segregation laws were suspendend in USA years and years ago, it seems that even today the way to the equality of values and humanity is still long and hard.

Discrimination is when someone acts on their prejudiced beliefs and tends to ‘label’ people into categories, by putting them into a disadvantaged situation. In fact, stereotypes damage people during their whole lives, from schools to workplaces.
This occurs when a manager promotes a man employee over a woman employee whose performance is even better, for example. Or when at school a student is bullied because he is part of a particular ethnic group and has got different customs, religion or simply even because of his/her social status or because s/he has got a particular disability.
But why do we usually judge books only by their covers? Stereotypes are probably our ‘comfort zones’ because it is easier to judge on their basis and it does not imply any efforts. On the contrary, it is more difficult to give opinions about people after breaking stereotypes and after getting to know people deeper and better because this ‘fair practice’ requires an effort, the effort of understanding and feeling empathy towards people who feel, look and are different from the way we look, we feel and we are. Because of this lack of ‘empathy’ we often use offensive language towards a person or a particular category of people, even if sometimes we do not do that on purpose, but we do it and….. words hurt!

All forms of discrimination make us feel wrong and different, and let us wonder “Why me? What’s wrong with me? “. Obviously, there is no answer.
As a matter of fact, discrimination produces very negative effects: for example it increases a low self- esteem; it arises the feelings of depression, isolation, anxiety, loneliness, decreasing hope in the future.
How can discriminated people be helped by the governments? Fortunately there are laws and measures that intervene in particular to punish discriminatory behaviours, violent conduct and provocation of violence. There are also the Regional Anti-Discrimination Networks. In Italy, for example, there are Italian associations created for the integration of foreign citizens and that deal with the prevention and removal of discriminatory behavior, promoting positive actions and monitoring discrimination in a specific area.

So, what can we daily do to fight against discrimination, then?
We can help reduce stereotypes and prejudices by reflecting on our own ideas and actions to see if we usually act in discriminatory ways either on purpose or unintentionally: auto evaluation could be the first step! We should also refuse to participate in activities promoting negative attitudes towards certain groups of people and above all we should denounce who is bullying and discriminating against someone else.
We need to be active against discrimination promoting fair practices and cultivating the experience of ‘empathy’, the ability to put ourselves in other people’s shoes.
Above all, we must not forget the motto of the European Union “United in Diversity“, because differences are a resource! We are all different from each other but we are all united in our differences because we are all human beings and diversity is the thing we all have in common. Let’s celebrate all human beings….let’s celebrate diversity everyday!