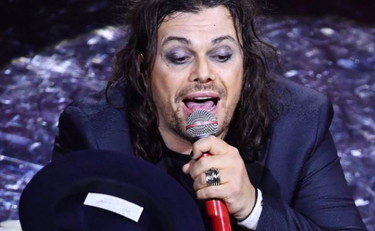 A great singer among the “sharks”

My mother says she likes Gianluca Grignani for more than one reason and in her CDs collection, among rock, metal and prog masterpieces (which are 99.9% of her disco) there is also one of his best song.

She tells me that she has always appreciated his way of singing with his soul (okay, damned but at least a real soul). That he has more than one demon is immediately obvious: at “Verissimo” the singer revealed the abuse and violence suffered when he was 10 and the death of a childhood friend for leukemia. Experiences that have marked his life.

It is said that years ago, in Lamezia Terme, wanting to emulate Sebastian Bach, he threw a can of beer hitting a child in a stroller. The security could do anything about it. He did the wrong stupid thing in the wrong place. Despite his wonderful wife and his four children, the singer was never able to fully break free from his addictions.

Yesterday my mum and I reviewed the videos that reported his performance at Sanremo Festival 2022.

He came out on stage looking like Johnny Depp, for resemblance, makeup and even similar hat. And above all alcoholic aspect. And immediately Gianluca Grignani was flooded with criticism, mockery and even backbiting, on social networks, but we imagine also in the hall at the Ariston Theatre. Criticism that increased when Grignani also jammed on a verse of his own song, “La mia storia tra le dita”, which is the song that Irama presented at the evening of the covers at the Sanremo Festival . Cynical mockery of him, perhaps even from the same people who had skinned their hands applauding Drusilla’s speech on uniqueness. Because Gianluca Grignani, for better or for worse, is a unique character, and so he should be accepted. A character with serious existential problems, he has been fighting with alcoholism for years. Probably that night he was also drunk, as it happened to him many times on stage.

We got even more angry with the organizers and presenters, who allowed him to appear in that condition on the stage in order to make audience.

Gianluca Grignani is an artist who still has so much to say and to give. And, let us say these words. Gianluca Grignani has written great one-of-a-kind pieces. Let’s take off our hats in front of him for his songs . Everyone standing. And without cheap bullying, because we all put on two mismatched socks, but when we see the difficulty in front of us then we play snobs. We are talking about a boy who made even those few bullies, who had fun hitting him, dream and excite, forgetting the wonder he is. Come on Gianluca Grignani, there are a lot of people who always remember you cool and with a melancholy smile but with unique and unrepeatable pieces.

Gianluca Grignani, once a poetry writer, felt lost at Sanremo festival. What a shame!