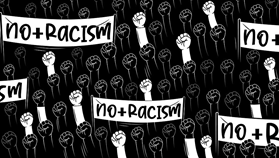 Racism has probably always existed but it took hold more with Hitler’s Germany policy which considered Jews as a people who represented a threat only for their presence, and then this ended with concentration camps, the death of millions.  of Jews and other ethnic groups that he considered “different” such as people of color, the handicapped etc. It was thought that with the death of the main responsible of the racist movement, a circle of social malaise could be closed and instead, apparently, even today, episodes of racist hooliganism are too frequent, such as fires of hostels and shelters for immigrants, desecration of cemeteries  Jews, posting stupid posters with swastikas, unfortunately even attacks on gypsies, immigrants, blacks, etc.

All this brings us back to an atmosphere of persecution, which, sincerely, we wished it would never happen again.

I remember a survey carried out in the newspaper L’Espresso in which it emerged from the statistics that 44% of Italians were against the presence of Jews in Italy and that they wanted to send them away because they were considered different.

Even if this request makes many people indignant, I believe that these surveys are not done accurately probably to feed audiences. Racism therefore arises from the need to persecute minorities in order to feel superior, to give oneself a psychological security that would otherwise be difficult to achieve.  Violent, extremist or simply nationalist political movements have often leveraged this sense of insecurity and frustration to extend their base of consensus. I believe that the Jews have attenuated the memory of the terrible “holocaust” which during the Second World War caused as many as six million victims among the Jews of all Europe and I hope they do not think back to the concentration camps, the gas chambers and the ovens crematoriums

Yet there are some bad-faith historians who rage against these already serious events, proposing, for example, a revision of history, trying to reduce the scope of the Holocaust and absolve Nazi Germany of the terrible responsibility for causing the Second World War.  In my opinion, the memory of the Holocaust, even if it is inhuman, should not be erased, it should be passed on from generation to generation so that similar events are not repeated in the future, even in different forms.

After all, we study history because of its great cultural value: it makes us aware of our roots, it brings us closer to a distant but somehow familiar world, whose heritage we collect and share.