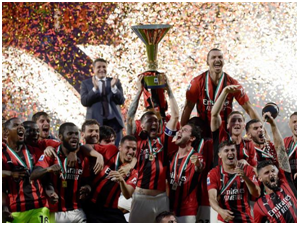 The Associazione Calcio Milan was founded on December 13, 1899 in Milan with the idea of a group of British and Italians who shared a passion for football and that gave birth to the AC Milan Football and Cricket Club. In over 100 years of the team activities, Milan has written several pages of football history by becoming one of the most titled and famous clubs in the world.  In the first 10 years of its history, Milan immediately rose to the forefront of the national news by winning 3 Championships (1901, 1906 and 1907), while in 1916 they won their first and only Federal Cup, a trophy that replaced the championship that year. One of the darkest periods in the Rossoneri history is the one that goes from 1919 to 1950. In those years the Rossoneri participated in the national championship of the First Division and starting from the 1929/1930 season in the Italian Serie A championship, but without being able to win even a single title.

The club also changed its name three times, which in 1945, at the end of the Second World War, became the Milan Soccer Association.  In the 1950s, thanks to the goals of the Swedish striker Gunnar Nordahl and the talent of Nils Liedholm, the Rossoneri put 4 Scudetti on the bulletin board and in 1958 they participated for the first time in a Champions Cup final (lost 3-2 against Real Madrid). The sixties are those of the Rossoneri’s first great successes that bear the signature of the coach Nereo Rocco.  The Rossoneri team included the strong Brazilian striker Jose Altafini, and then the young Gianni Rivera will become a symbol of the Rossoneri.  In 1962 comes the 8th title of Italian Championship and in 1963 the first historic Champions Cup, successes that will be repeated in 1968 (Scudetto) and 1969 (Champions Cup).  In 1970, again with Nereo Rocco on the bench, the first Intercontinental Cup in Rossoneri history also arrived.Over the next 15 years, the Rossoneri are going through a period of ups and downs with the conquest of the 10th Scudetto but also with two relegation to Serie B: the first came in 1980 because of the underground betting scandal, while the second comes on the field in 1982. The turning point came in 1986 with the arrival of Berlusconi as the club guide.  The new president invests extensively in the team under coach Sacchi and the Dutch in the field in 1988 he won the Scudetto in 1989 and the European Cup and the Intercontinental Cup.  The team’s symbols are Franco Baresi and Paolo Maldini that will drive even Rossoneri with Fabio Capello on the bench.  In the 90s the Rossoneri won everything in Italy and in Europe, successes which are also repeated in the next 15 years: in 2008 comes the first Club World Cup and in 2011, with Massimiliano Allegri on the bench, AC Milan won the its 18th Scudetto.

For several years the Milan logo was simply the flag of Milan.  Another nickname that derives from the colors of the company is Il Diavolo and consequently the image of a red devil printed to the right of a star was also used as the logo of the company, recognition of the victory of 10 championships.  The emblem shows the red and black company colors on the left and the flag of the Municipality of Milan (a red cross on a white background) on the right, with the initials ACM above and the year of foundation (1899) below.

Since 2015, rapper Emis Killa and bassist Saturnino have been the interpreters of the official Milan anthem, launched on the occasion of the club’s 116th birthday to replace Milan, Milan, written by singer-songwriter Tony Renis, a Rossoneri fan, and by Massimo Guantini, with small contributions in the text by the patron Silvio Berlusconi Previously, in 1984 another Rossoneri musician, Enzo Jannacci, had written and performed the hymn Mi-mi-la-lan for the Milanese team.

Since February 16, 2006, the official mascot of AC Milan, designed by Warner Bros., is Milanello, a red devil wearing the Rossoneri uniform and a soccer ball, whose name also pays homage to that of the club’s sports center.  Previously, in the nineties this role was entrusted to Dudy, the Milanese version of Five, the historic mascot of the Canale 5 television network;  since the 1980s, both the team and the broadcaster have been owned by Silvio Berlusconi, and “Dudy” was the nickname of his second son, Pier Silvio Berlusconi.