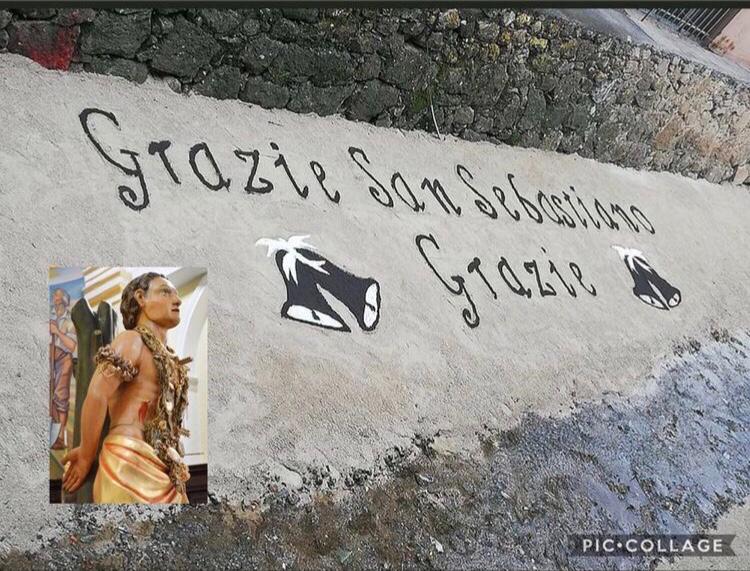 The feast of St. Sebastian in Tortorici is ancient and rich in traditions. Its origins can be dated  back to the so-called diluviu. In  1682  an impetuous river of mud poured over the town, destroying  everything encountered on its way. The mud  also dragged away the bell of the church of San Nicolò, and for a long time nothing more was known about it. One day, two pilgrims returning from Rome, arrived at the Calagni stream, near the town, were held back by a mysterious force. They got scared and began to scream, a lot of  people came and all saw  the miracle that had taking place:  a chasm had opened and over there  completely intact there was the bell that disappeared during the flood  (the diluviu).

The two pilgrims in tears, confessed to the Tortoricians that they had stolen the relics of St. Sebastian in Rome.

The feast in honor of St. Sebastian begins on January 1st  with the sound of the bell and the exposure of the saint to the town. The first manifestation is the Bula which falls on Saturday closest to January 13th. On Sunday before the Feast, in the morning, the devotees start ,after returning from the procession of S. Antonio Abate, the Laurel Parade along the streets of the town up to the Church of S. Maria Assunta.

In the afternoon of January 18th,as part of the celebrations in honor of St. Sebastian Martire, a secular rite called fujitina da vara is renewed . In the evening, some devotees carry the Vara, without the Saint, from the Church of S. Maria along Via Pizzuti, to the Church of SS. Salvatore and  they leave it there. This act would represent the attempted theft by criminals of the saint’s relics. Theft, however, was not successful and the relics were therefore recovered.

In  the evening of the same day, in the church of S. Maria Assunta, the Saint is taken out of the cell, where he is placed for the rest of the year, he is covered  with the gold that devotees have donated over time. Then the  Saint is exposed to the faithful, this rite is called “the Proof”. During the Mass the Panitti of S. Sebastiano are blessed,  they are  small loaves made with white wheat, they are distributed to the faithful  in the Church and subsequently to the faithful in the town and in the districts. They symbolize the loaves that Saint Sebastian brought to Christians people in the catacombs during the night.

The feast is always  on January 20th , the devotees who have a vow to dissolve, go naked to the Saint. The men, as a penitential sign, dress white shirt and trousers, a handkerchief folded like a triangle around the waist and barefoot. The women wear white shirts and skirts, the handkerchief covers their head and barefoot they precede and follow  the Saint in the procession.

The religious rite is celebrated in the Church of S. Maria Assunta. At midday the procession begins through the streets of the city. Only the naked people can carry the  Vara  ,this is a privilege but also a penitential obligation.

The first step of the procession is near the Calagni River where the devotees stop the Vara invoking grace, this rite represents the complex relationship of the town of Tortorici with the rivers.

After the rites in the church of San Nicolò, the Saint is carried in procession through the streets of the town, taking up the “begging” for the remaining streets of the city. Finally, the Saint is brought back to the church of Santa Maria Assunta where, before returning, the naked people  perform a suggestive ballet with the Vara, turning three times around the square.  The next Monday is the eighthy day and the so called  Missa du Pirdunu takes place, during the Mass the cotton in the Reliquary of St. Sebastian is replaced and the fragments are given to the faithful.